I started to write about Biblical morality and homosexuality, but after two frustrating hours of research, today’s blog is instead about the tragedy of Biblical apologetics. The Bible has diverted Western humanity from real ethical progress for far too long, by forcing Christians and Jews to defend the indefensible.

It started with Sisyphus Fragment’s blog about morals and the Bible. From there, I headed over to Religious Tolerance: The Bible and Homosexuality. I thought the Bible’s stance on homosexuality was a slam-dunk (“It’s an abomination!”), but I ended up quite dizzy trying to follow all the convoluted details, mistranslations, and contradictions. It turns out the Bible is quite ambiguous and contradictory. How can this be, if it’s the word of God?

Then I ran into the story of Jacob’s wives, concubines and children, something that God seems to have had a direct hand in, and was dumbfounded — how can Christians and Jews take this stuff seriously? A man lusts for a teenage girl, whose father agrees to the union but then slips the older sister into Jacob’s bed? And then he argues that Jacob should sleep with her for just a week, and then he can have the younger sister too? Jacob ends up with two wives, but one can’t have children, so she forces various of her slaves to have sex with Jacob, who doesn’t protest about this arrangement. Wait a second, I thought Jacob was one of the good guys!

Still dizzy, I dug around a little more and found Homosexuality and the Bible, by the Rev. Dr. Walter Wink. Finally, one sensible essay! My sanity started to return. Rev. Wink thoroughly debunks the idea that Christians can or should take the Bible literally on matters of morality. First of all, it’s plainly contradictory in many areas, and second, there are many Biblical laws that are just plain immoral.

But by the time I finished Rev. Wink’s excellent essay, I was sad and angry about the Bible. It is a sucking quagmire of contradictions, but one that is believed to be God’s word. This forces intelligent, honest, sincere Christians to defend the indefensible. Since it’s indefensible, they have to spend a huge amount of time and energy concocting “work-arounds”, convoluted arguments that purport to explain the inexplicable.

This is a very sad thing. If the Bible were instead plain, to the point, and self-consistent, these same sincere, moral, honest people could devote their time and energy to so many more meaningful activities. If you think in economic terms, we’re probably talking about more wasted man-hours than any other single activity in history.

My favorite example of this is illustrated by Bart Erhman. In the Introduction to Misquoting Jesus, he recounts how he spent many hours writing a complex and convoluted term paper for a class about the Gospel of Mark, trying to justify why Jesus said “when Abiathar was the high priest” when in fact 1 Samuel 21:1-6 plainly says Abiathar’s father Ahimelech was the high priest. Ehrman writes that he was quite proud of his contorted logic; the Bible couldn’t be wrong, and he’d figured out an explanation for this glaring contradiction! But his pride was deflated when his professor wrote one short sentence at the end of his paper: “Maybe Mark just made a mistake.”

Craig A. James is a writer, computer scientist, evolutionist, and movie producer. He lives in Southern California.

"The Religion Virus: Why we believe in God" by Craig A. James. https://t.co/sM6xpSZ0p9 pic.twitter.com/1TyVfcamup

The True Core Of The Jesus Myth | Christopher Hitchens 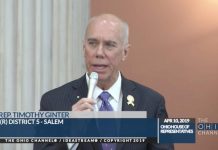