Last month, the United Nations hosted a Sustainable Development Goals (SDG) conference in Bonn, Germany. Despite hopes that limiting population growth would be the UN’s centerpiece topic, concerned attendees came away disappointed, with the impression that political correctness ruled the day, and that feel-gooders rather than do-gooders dominated the agenda.

The conference offered not a single population or biodiversity session, even though non-human life plays a crucial role in maintaining planetary health. Instead, the conference focused on “leaving no one behind” despite ecological limits and realities. International migration, which is gripping Europe and the United States, was conveyed as a necessity and an unmitigated good. When a realist in the audience asked how it would be possible that some would not inevitably be left behind when the planet adds 80 million people annually to its existing 7.6 billion, the moderator dismissed his question as too negative.

One overall UN theme was contradictory: “think globally, but act locally.” The U.S., while it may or may not be prepared to think globally, has an immigration policy that ruins any chance at positive local action toward sustainability.

The Census Bureau provides an instructive mathematical breakdown on population growth’s components. The current U.S. population is 327 million; one birth occurs every eight seconds, and one net international migrant arrives every 28 seconds, but deaths offset the increases by only one every 11 seconds. The result is that each day the U.S population has a net gain of one person every 14 seconds.

The Pew Research Center projected that by mid-decade the population will increase to more than 441 million, driven by immigration. The same researchers concluded that if immigration were cut in half, population would grow by 70 million; if eliminated, 31 million.

U.S. growth is the direct consequence of Congress’ unwillingness to consider immigration’s long-term effects on the nation’s population, a failure that’s repeated itself for 53 years. Republicans and Democrats are equally culpable.

During the Senate hearing about the effect the 1965 Immigration Act might have on population, New York Sen. Robert Kennedy, responding to North Carolina Sen. Sam Ervin’s questions, acknowledged that the legislation would eventually double U.S. population, and that mass immigration to America couldn’t and wouldn’t solve global overpopulation. Senators Ervin and Kennedy were right in their analysis, but wrong in their votes to pass the legislation. Both sides of the aisle overwhelmingly voted for the 1965 Immigration Act.

Since the Immigration Act’s passage and through 2015, with new immigrants, their children and grandchildren, 72 million people were added to the U.S., which accounted for 55 percent of the nation’s population growth. The modern immigration wave vastly exceeds previous migration flows: between 1840 and 1889, 14.3 million immigrants came to the U.S., and between 1890 and 1919, an additional 18.2 million arrived.

Continued growth, the path that the U.S. travels today, will not have a happy ending. And even if it were survivable, indefinite growth is highly undesirable. Demands on infrastructure – transportation, water, schools and housing – have already reached or passed the breaking point in some parts of the U.S., most notably in the American Southwest.

During the 1960s and 1970s when Congress debated the Immigration Act, the U.S. population was 189 million and 213 million, respectively. Yet, no one argued then that America was too small or too economically weak.

Despite overwhelming statistical and irrefutable evidence that the U.S. is on a population collision course, immigration-induced increases remain, to the bewilderment of most Americans, verboten in Congress.

Joe Guzzardi is an analyst and researcher with Progressives for Immigration Reform who now lives in Pittsburgh. Follow him on Twitter: @joeguzzardi19. 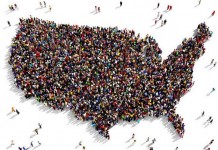