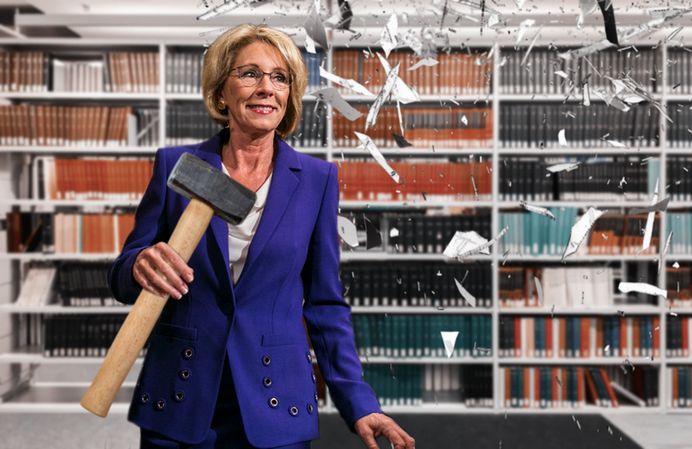 For many Americans hearing incompetent Education Secretary and evangelical extremist Betsy DeVos’ name is tantamount to having their eyeballs gouged out with a rusted salad fork. For Americans concerned about educating the next generation to live and compete in the 21st Century, DeVos represents a clear and present danger to the nation as it has existed since its inception.

It is no secret that DeVos hates the public school system for a variety of reasons, but chief among them is that they are not taxpayer funded evangelical madrassas and they do not yet exist to enrich her wealthy cohorts in the corporate private and religious school movement. In fact, DeVos was disappointed to learn that because the federal government does not contribute nearly as much education funding to states as she believed, she is unable to impose her evangelical agenda on states’ public schools as Education Secretary. Now she has a solution to complete her task of using taxpayer money to propagandize American children in America’s version of Christianity.

For a reminder, DeVos clearly stated that her goal in running Trump’s Education Department is shaping the culture “to advance god’s kingdom.” And she fully intends to force American taxpayers to fund her effort as part of a larger Christian Dominionist movement to restore Judeo-Christian values under the Constitution by 2020. While Americans have been ignoring the warnings and real threat out of fear of offending “the faithful,” theocrats have been systematically setting the stage to reach their 2020 target date and DeVos’ actions are a crucial part of the plan.

DeVos’ effort entails redefining corporate charter and private religious schools as “public” to legally funnel taxpayer dollars away from “non-religious” and “non-profit” public schools directly to her friends in the religious and charter school movement. DeVos exposed her devious machination during a meeting of 50 teachers of the year during her response to concerns that her anti-public school agenda is already damaging public schools.

DeVos revealed her “plan” during a private visit when she asked the country’s “top teachers” to describe the obstacles they face in doing their jobs. At least one of the teachers had the courage to speak the truth and he told the public school enemy that many of her policies are damaging public education. In particular, Oklahoma’s teacher of the year, Jon Hazell, questioned her unconstitutional policy of using “taxpayer money meant for public education to fund private, mostly religious schools.” Mr. Hazell said:

“We have a problem where public money is siphoned off from the public schools and given to children who are going to [corporate] charter and private [religious] schools.”

Mr. Hazell said DeVos’ immediate response was shocking. She told the gathered public school teachers that her intent was to redefine “what education is and declare all of it ‘public’ education.” The reason is clearly to legally fund religious, private and corporate charter schools, all for profit, with money stolen from public schools.

Another “teacher of the year” from Pennsylvania, Michael Soskil Sr., confirmed Mr. Hazell’s account of the exchange and like Mr. Hazell, he was stunned saying:

“One of the things that was so stark and memorable in that exchange was … Secretary DeVos trying to redefine what the word ‘public’ is. It was almost like Orwellian double-speak to me.”

Most Americans are aware that DeVos is more of a “know-nothing” than her boss Trump, particularly about the public education system, and that she is a filthy rich member of the upper echelon of the richest one-percent. But she is also a raving evangelical theocrat desperate to eviscerate the public school system to fund private, for-profit, religious schools. The only reasonable assessment of DeVos is that she is a “radical Christian extremist intent on using America’s public school system to ‘advance god’s kingdom;” and she is on a mission to force American taxpayers to fund her theocratic crusade.

One of the reasons DeVos is so enamored with private religious and charter schools is she relishes using taxpayer dollars to discriminate against gays, the disabled and women according to “the sensibilities” of the conservative Christian movement. In fact, DeVos is very upset that there is no federal taxpayer money to fund private religious and charter schools. So her plan is making them “public” to rob taxpayer dollars.

When DeVos was queried about her intent to spend taxpayer dollars on evangelical madrassas, an intent that is patently unconstitutional, she said:

“There are not enough philanthropic dollars in America to fund what is currently the [theocratic] need in education…[versus] what is currently being spent every year on education in this country…Our desire is to confront the culture in ways that will continue to advance God’s Kingdom.”

DeVos has made no secret that, in her evangelical mind, the pressing need in the public schools system is more Christianity, more god, more prayer and more archaic mythology disguised as science. And since filthy rich evangelicals like her are unwilling to pay tuition for parents that demand religious indoctrination for their offspring, DeVos is more than willing to “destroy public education and use public school funds to advance her dreams of a Christian theocracy.”

There are already many Republican controlled states that are funneling money meant for public schools to private religious and charter schools that are for-profit. And although it is patently unconstitutional, the religious Republicans want to use all federal education money to inculcate American children according to their evangelical form of Christianity.

DeVos, like all of Trump’s people, took a “so help me god” oath of office and swore to her god that she would “support and defend the Constitution of the United States … without any mental reservation or purpose of evasion; and that I will well and faithfully discharge the duties of the office on which I am about to enter. So help me god.”

Instead, DeVos is purposely defying the document she swore to uphold and defend by going to extreme measures to force Americans to pay for “advancing god’s kingdom” in the “public schools.”

This idea of using the federal government to extract money from taxpayers to “continue advancing god’s kingdom” is an abomination, and in no small measure the blame is on the media and Democrats who are still terrified of even mentioning that DeVos’ “school choice” nonsense, or attacks on women’s reproductive rights, or blatant discrimination against the LGBTQ community are borne of theocrats pushing their religion on the population as if it is the law of the land.

At this juncture it is apparent that the Dominionist movement attempting to create a theocratic government is perilously close to reaching fruition by the movement’s 2020 target date. And it is worth noting that once the theocrats have succeeded, Americans will lose the right to criticize the unconstitutional use of taxpayer money to advance the kingdom of god.