The Republicans know that the majority of Americans want the Roe v. Wade decision to be upheld, but instead of representing their constituents, they’ve been attempting any trick in the book to get SCOTUS nominee Judge Brett Kavanaugh confirmed.

He called contraception “abortion-inducing drugs,” which is simply incorrect and has been long since debunked. Unfortunately, the “pro-life” movement has been pushing this lie to defend their anti-woman agenda.

Any senator that genuinely supports Roe v. Wade knows that Judge Kavanaugh will absolutely help overturn it in the first term. And it isn’t just feminists and abortion-rights activists who are saying it. An ultra-conservative organization known for its anti-LGBTQ views, Focus on the Family, believes he’ll be a pro-life advocate on the bench, too!

I was reading a BuzzFeed News article on my phone over the weekend and noticed an advertisement for the organization, which has a very public relationship with Vice President Mike Pence and his family. The ad leads to a fundraising page expressing their support of Judge Kavanaugh in the Supreme Court.

I won’t be linking to the website, but it can be accessed by anyone. For your convenience, a screenshot of the full page is available here.

Focus on the Family frames Kavanaugh as a man who’ll be a justice who will support their views of what counts as “religious liberty” (i.e., allowing discrimination against LGBTQ people) and “life” (i.e., forcing people to reproduce at the cost of bodily autonomy). They say they are “thrilled” with him as a choice.

“As supporters of life and liberty,” the page says, “we are thrilled Judge Kavanaugh’s nomination is moving forward.” They then talk about their track record of allegedly “protecting the sanctity of life” and ask for donations to support their continued efforts. Donors can give any amount, but the buttons with pre-selected amounts start at $50 and go all the way to $1,000.

Anyone who isn’t a conservative knows that Focus on the Family’s support is just another reminder of what’s at stake if Kavanaugh is confirmed: another extreme ideologue in a lifetime appointment.

Focus on the Family is the former home of the Family Research Council, which is deemed a hate group by the Southern Poverty Law Center for its anti-LGBTQ agenda. They oppose the use of emergency contraception and IUDs, which don’t cause abortion. If these are the types of people that are excited about Kavanaugh, this is a giant red flag.

What Kavanaugh said wasn’t a slip. It is a sign that he is part of the political agenda that the Guttmacher Institute says is about stigmatizing contraception by (incorrectly) associating it with abortion. Do we really want someone who rejects basic science in the interests of a powerful minority in the Supreme Court? 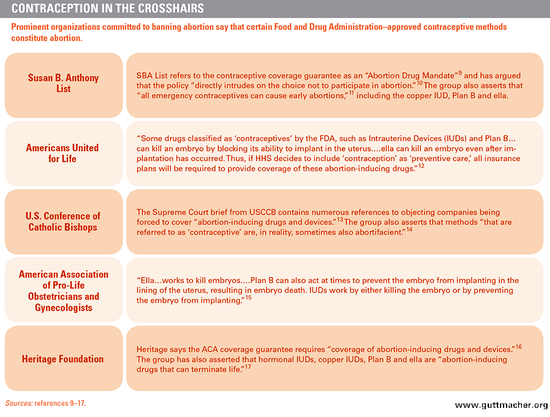 Planned Parenthood executive on the future of Roe v. Wade

Could Roe v. Wade Be Overturned?

Abortion frontline of America: life and death in Texas

Tenn. pastor: Women who have abortion are like bald eagle killers