Rank of Brett Kavanaugh’s 2018 appointment to the U.S. Supreme Court among the reasons there’s a new push to ban abortion in state legislatures across the South and elsewhere: 1

Size of a single anonymous donation JCN got during the period between July 2017 and June 2018, when abortion rights-protecting Justice Anthony Kennedy resigned, opening the door to Kavanaugh, who was backed by anti-abortion groups: $17 million

Number of other anonymous donations JCN got that year, all of them at least six-figure: 9

Year in which Carrie Severino — a former law clerk for Supreme Court Justice Clarence Thomas and spouse of Catholic anti-abortion lawyer Roger Severino, who now runs the Department of Health and Human Services’ Office of Civil Rights and opposes contraceptive access under the Affordable Care Act — took the helm of JCN: 2014

Among JCN’s top funders, rank of the Wellspring Committee, a secretive nonprofit that serves as a conduit for anonymous contributions to conservative causes and is led by hard-line Opus Dei Catholic Ann Corkery and her husband, Neil Corkery, who has served as JCN’s treasurer: 1

Decades for which Leo — also reportedly an Opus Dei member who plays a key role in hiring at George Mason University’s law school in Virginia — has worked to push the judiciary to the right in order to enable an abortion crackdown: 3

According to conservative commentator Ed Whelan, number of people “more dedicated to the enterprise of building a Supreme Court that will overturn Roe v. Wade” than Leo: 0

Month in which Leo told a gathering of conservative activists in Florida that they had to mobilize in “very unprecedented ways” to finish their transformation of the U.S. Supreme Court: 2/2019

Between 2014 and 2017 alone, amount Leo and his allies raised for JCN and other secret-money nonprofits to carry out their court-transforming agenda: more than $250 million

Year since JCN has also been funneling millions of dollars to state supreme court races, money that has bought misleading or even libelous ads: 2012 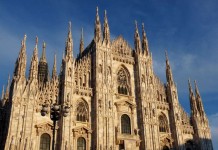