Somehow, it’s always something outside the Church, either in the laity or the public at large – the very people whose children were abused – who are to blame. It’s never the fault of the predatory priests themselves. They, poor things, are merely victims themselves – sometime even of the children they couldn’t help abusing.

The latest bishop to try to deflect blame away from the paedophile priests and the culture of the church which facilitated and covered up their predation on vulnerable children, is Bishop Thomas Paprocki of Springfield, Illinois. Responding to the Pennsylvania Grand Jury report into child abuse by Catholic priests with an eight-minute video entitled “Sexual Misconduct: Pruning and purification continues within the church”, he said:

Highlighting the large percentages of U.S. Catholics who disagree with church teachings on contraception, cohabiting before marriage and same-sex marriage, he added:

Clergy as well as lay people have far too easily rationalized why and how the church’s moral teachings on sexuality and chastity do not apply to them, resulting in the scandalous situation in which we now find ourselves.

Humane Vitae is Pope Paul VI’s 1968 encyclical which condemned extramarital sex as a sin and confirmed the Church’s prohibition on all forms of contraception other than the ‘rhythm method’ of abstention during the woman’s fertile period (the least effective form of contraception). Apparently, the fact that most U.S. Catholics ignore the Church’s teaching on these matters somehow magically turns Catholic priests into predatory paedophiles, totally unable to control their appetite for children to abuse.

In The National Catholic Reporter, Brian Roewe points out that the blaming of gay priests for the church’s clergy abuse crisis has been a recurring theme since the scandal first exploded nationwide in 2002 following the Boston Globe’s investigations. The debate’s recent rise followed accusations against McCarrick, the retired former Washington, D.C. archbishop, of sexual misconduct with adult seminarians in addition to abusing minors, as well as reported instances of sexual abuse and misconduct within several U.S. seminaries.

As Todd Salzman, a theologian at Creighton University who studies moral theology and sexual ethics, told the National Catholic Reporter:

[attempting to reduce the clergy abuse scandal down to a sexual ethical issue] fundamentally missed the point of power and power structures in the church, and the abuse of power that requires fundamental reform.

To use reference to the sexual revolution or the Catholic faithful’s rejection of Humanae Vitae as somehow related to the sex abuse scandal is just another way to project onto society, or the laity in the church, a distorted notion of collective responsibility. The responsibility for this crisis resides solely with abusive priests and bishops, bishops who cover up abuse and do not work towards foundational structural reform in the church, and the culture of clericalism.

The tendency of even senior figures within the Catholic Church to look for excuses and scapegoats for the behaviour of Catholic priests does not auger well for attempts to control and prevent it and so protect vulnerable children and adults. As Marianne Doddy-Burke of Dignity USA points out, there is deeply corrupt and rotten at the core of the Catholic Church. The fault lies with the internal structure and culture within the church that has allowed sexually predatory clerics to operate unchecked probably for many centuries. Part of the problem lies in the tendency of the pious to award themselves a little moral self-licence; a little recreational relaxation from the rules they try to enforce on others because they feel they have earned it.

Bishop Paprocki slams homosexual ‘marriage’ as ‘work of the devil’ 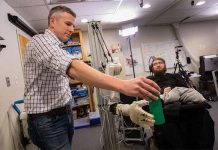