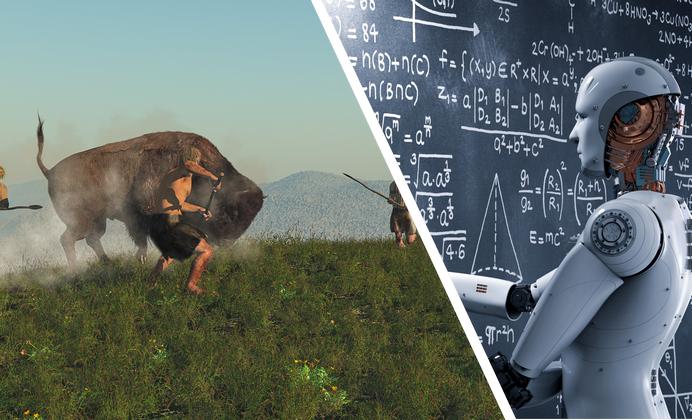 Technology has been disrupting and advancing the way we live, and maybe even the way we evolve, for over 3.5 million years. It was that long ago that ancestors, the Australopithecus, started using stone tools. For roughly 3.4 million years stone tools supported the evolution of our species and social structures, eventually leading to civilization itself. From the time the first known stone tools were formed to the start of the Bronze Age over 5000 years ago early humans evolved through four species, learned to control fire, wear clothing and cook food. Over the next 5,000 years we would learn to write, print books, sail across the oceans, cure disease, split the atom and travel to the moon and back. It’s been man AND machine ever since.

While it may have been inconceivable to our Australopithecus ancestors that their stone tools and control of fire would eventually lead to their future generations walking on the moon, we too may well be unable to see or imagine what is in store for us. Just as it’s impossible to know what is on the other side of the mountain until you climb to the top, it very well may be impossible to see what’s in store until new technologies grown and mature, are used in new ways and maybe even new technologies build on top of them or replacing them.

“Ultimately, progress is driven the human creativity and ambition for something better.”

“Man AND Machine’ or “Man OR Machine”?

As we’ve just seen humans and machines in one form or another have been together since before we were even homo sapiens. For almost all that time there never was a question of whether machines added value or took away value from people. The machines quite simply added value to any individual that used them. The simple machines we call tools, eventually enabled people to become more productive to the point everyone didn’t need to be constantly involved with survival basics.

While there is no way of knowing if our ancestor hunter and gatherers experienced unemployment or devised welfare programs for the displaced as tools became more advanced we do know our ancestors found other uses for the time it freed up. Eventually it led to the specialization of labor and the creation of new trades. This specialization enabled people to learn more and become more capable. This in turn enabled the development of cities rather than smaller bands of people working together and even greater specialization.

It is perhaps with the specialization of labor that the question of whether machines displace humans or help humans really comes to focus. If a machine enables you to be more productive and have more free time, more money, more food or better shelter the machine is obviously helping you to have a better life. Certainly, an early simple machine like a bow and arrow falls into this category. But once people have specialized jobs and someone creates a machine to do that job, then we start to see the struggle of Man Vs. Machine such as with the Luddite Rebellion.

Even today, as the Fourth Industrial Revolution begins to unfold, there is hot debate over whether the technological evolutions and revolutions lead to the creation of more jobs than they eliminate or whether there will be a jobpocalypse. Such assessments are overly simplistic. If our past shows us anything, it is not an either or issue. Technology will catapult some people and society overall forward while at the same time displacing and leaving a large number of people behind. Clearly the relationship between man and machine is as complex as any human relationship.

“How will we support the people displaced by advancing technology?”

Looking Back to Look Forward

Decisions we make today will have an impact on our life in the future. Having an understanding about the future can help us to make more appropriate decisions today. But how do we make the best decisions today for an uncertain future? Looking at the history of the impacts of technology on society may in provide some clues.

Consider the impact of the printing press. While suddenly the needs for scribes diminished, the ability to print large quantities of books led to the democratization of knowledge. Anyone could have access to books and the information they contained, not just the chosen few. Schools and universities were formed. Literacy became an important skill and those who learned to read and had access to books had an advantage. No longer was it necessary for people to be told what a sacred text said or meant. They could see it for themselves. It changed the power dynamics of society and unleashed the potential of everyone who learned from reading. Even today many groups see literacy as a subversive skill set and so actively prevent members of their society from learning. Did the invention of the printing press ultimately lead to the rise of democracies and the fall of feudalism and imperialism?

Let’s look back at the First Industrial Revolution, when machines started taking over the jobs of skilled craftsmen. Rather than simply helping a worker do more with less, the machines were designed to do the work of people, eliminating the need for people in certain roles. While the Luddites are thought of being foolish for fighting progress and technology, they were right that their livelihoods were about to be destroyed. Clearly their approach of attempting to destroy technology did not work and as we progress through the Fourth Industrial Revolution attacking technology will also likely fail.

As the Second Industrial Revolution began and progressed we saw the rise of conflict between workers and owners (labor and capital). Issues ranging from working conditions to wages to child labor to company towns came to front. Tensions were even frequently violent requiring the intervention of the military, such as with the Pullman Strikes. A series of severe recessions also wreaked havoc on the economy and the well-being of most people. It was during this time we saw the creation of the Federal Reserve, income taxes, legislation regulating the market and especially anti-competitive behavior, the concepts of both Marxism and the Invisible Hand of free market economics. The very nature of business, the economy, and social contract changed. As we dive into the Fourth Industrial Revolution will we see similar shifts? Will the gig economy, sharing economy and cryptocurrencies reshape the economic and financial landscapes? Will increased automation make some people unemployable? Will there be a need to rewrite the social contract? Will universal basic income necessarily be a part of that?

In the past, war, revolutions and violence accompanied the technological shifts. The combination of new weapons and tension between those who lost out and those who gained rose. During the Third Industrial Revolution the social safety nets created at the end of the Second Industrial Revolution seems to blunt the economic hardships, leading to significantly less violence against technology and the winners and losers of the economic impacts. Will the Fourth Industrial Revolution continue to see a decline or absence in the struggle? As the economy has become more global will the conflict shift from being local issues to more regional and global war? Will the warfare of the future be less physical violence and instead focus on information and data?

What lessons from the past do you see as helpful for guiding yourself, your business and society?

Larry Boyer, CBE, ACC helps people and businesses prepare for the changing and evolving economy of the 21st Century. He is a recognised leader in advanced analytics, finance & economics, future technologies and personal development. He speaks, writes and consults on these topics and their impacts from a high level bringing them down to a more personal level where you can take action. His book The Robot In the Next Cubicle: What You Need to Know to Adapt and Succeed in the Automation Age is available for purchases where ever you like to buy books.