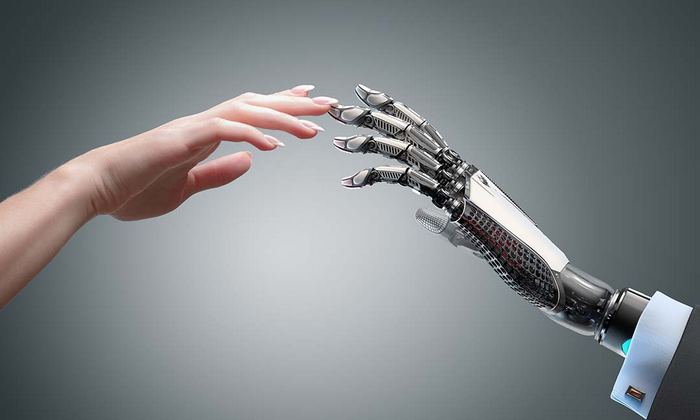 What does it mean to be human?

From a biological point of view, being human means DNA that codes for homo sapiens. It is an obvious answer when we talk in pure scientific terms. When we ask psychologists and philosophers, the answer becomes more complicated, adding social behaviors, creative ability and more.

However, how many years separate our status as homo sapiens and homo novus (new human), or homo superior (superior human)? Advances in artificial intelligence, robotics, and genetic engineering are giving us a glimpse into how humans could evolve by design into something new.

Is the patient with replacement synthetic limbs still human? Most of us would say yes. His genetic code hasn’t changed. These limbs are still primitive in design and function, so we still consider the person disabled. No big ethical discussion needed. The patient lost his “good” biological arms and got replacements of lower quality.

What happens when we look ahead say 20 years from now and those same mechanical arms are stronger, faster, more precise and more sensitive than biological arms? Will the disabled become superior to those who still have their original biological set? It is possible that entirely normal people would then go to the surgeon to replace their perfectly functional limbs with bionic super-limbs. Then, losing a limb may not be so bad either. This is not only possible, but unavoidable. It may take over 20 years to get there, but we may not be too far off the mark. Will the creation of “improved” humans change our definition of humanity and create a subdivision of humans within our society?

Defining what “human” means may require more thought. Perhaps there is more to being human than our genetic code.

Let’s look at this from a different angle for a moment.

We’ve been able to make amazing advancements in genetic engineering in the last five years. Gene editing using the CRISPR system has been in the spotlight most. The CRISPR-Cas9 molecule complex allows us to change genes from their original code sequence to anything we like. Also, using other well-established techniques, we can insert new genes, chemically suppress existing genes and remove unwanted genes with amazing precision. Near the end of 2018, we have witnessed the first gene edited embryos thanks to Chinese scientist He Jiankui. He changed a specific gene in the embryos that should make the babies resistant to the HIV virus. Most importantly, this type of genetic modification will be transmitted to the baby’s progeny. This was a surprising first that will go down in history, though the scientific community and regulators did not receive the news with glee.

Surveys within the North American population has shown there is strong support of gene editing to treat disease but there is very weak support for using gene editing to enhance humans. We can use the exact same technology and techniques for either of those goals. We can enhance our biological bodies by introducing new genes, making us stronger, more resistant to disease, taller, regenerate limbs, grow additional organs and so on. We have done none of this just yet, but Dr. Jiankui’s clinical experiment opens the door for more to come. If I receive a gene that enhances my human abilities, am I still human or something else? Does it matter if the enhancement is biological or mechanical? What if I receive a manufactured kidney (see lab-grown kidney research) to replace a diseased one, or one that is underperforming? Since we manufacture the kidney, the doctors could enhance it to give me better blood filtration and perhaps produce more adrenalin when I need it when I play sports. Would swapping an under-performing yet healthy kidney with a brand new superior one make me something else than human? Does it matter if the enhancement is genetic, a swapped body part for an enhanced one, mechanical or biological?

I don’t have answers to any of those question. These are all options we will discuss within the next generation or two. I think we should encourage such choices and avoid segregating one type of person from others. Throughout our own history, we’ve categorized as superior or inferior humans with almost identical genetic codes. 99.9% of the human genetic code is identical, and yet we’ve done horrible things to other people when the only difference is gender, skin color, bone structure. I don’t think we want to rekindle differentiation of our species in our future.

I think though we need to look at humanity with a broader brush. We’ll soon have the extraordinary means to enhance ourselves using biological and artificial materials. I think it is best to talk about it now rather than later.

Imagine if we have superior robotic appendages and AGI, we could have manufactured robots that look like us and behave like us, with the collective capability and intelligence of any human being on the planet. Engineers could program some to be our friend and partners. In the science fiction series Star Trek: The Next Generation, science fiction writers have played with the notion of such a creature having superior capabilities and sentient-level awareness. The character Data integrated so well into the Enterprise crew in the Star Trek universe that his peers viewed him as a person and an equal. Not human since he identified as an android, but as a person nonetheless.

Data was a full member of the crew and a decorated officer throughout the series, seen as a friend and colleague by all the main characters of the show. The character famously aspired to become more human and yet was appreciated and loved as he was.

In “The Measure of a Man” episode, Data and his captain go through a trial where a judge grants Data full legal status with the same rights and privileges as any other person. If he had lost the court battle, he would have had no rights and been treated like a machine. In the show, it was said he would have been no more than a slave. If the judge’s ruling would have gone a different way, it would have set a terrible precedent defining any mechanical construct as a “thing” instead of a person, no matter how clever or self-aware the mechanical being could be. It would have defined organic, DNA based intelligence as more deserving of basic rights than mechanical beings of equal intelligence.

We’ll be discussing those differences soon enough and we must create this same legal precedence soon. Perhaps the discussion will be made over an android, like Data. Perhaps we’ll be discussing over a human being that has gotten so many body parts replaced with mechanical ones he or she is mostly metal. I think the material in which we are made matters not. Every being should have proper rights based on their level of awareness, right?

The new cinematographic action movie “Alita Battle Angel” shows an example of what human genius could achieve in robotics and cybernetics. Alita was a normal human girl, but early in her life, a robotic body replaced her biological body. She still has a human brain, but she remembers nothing from her past. It is a familiar story told in another original Japanese story called “The Ghost in the Shell” and in the classic feature ““RoboCop”. In all three cases, the human brains were reprogrammed somewhat, memories erased, and the character’s robotic bodies gave them amazing abilities only possible with mechanical parts. Yet, they were all a mix of organic and robotic. In the end, they were all entirely human once. Their creators transformed their biological brains to create robotic slave-beings, capable of human-level intelligence. The only difference between their intelligence and an AGI’s intelligence, is that theirs was originally human. If the only part of the body that has human DNA is the brain, and the rest is mechanical, is that creature still human, or something else?

I believe the #Singleton will occur as well. However, I believe we shouldn't look at leadership tends to identify it's ultimate shape. I think looking at our tech-enhanced population and… https://t.co/fIyYtlB8Hm

I submit it depends on the reprogramming since programming determines behavior. So, a human brain with a robot body is still a human right? What about an AGI capable of mimicking human behavior operating a cloned human body? Is that human or something different?

In the future, we can use cloning technologies combined with genetic engineering to create human DNA bodies reprogrammed to behave in a non-human fashion too. We could engineer these clones as enhanced humans or as biological robots. The genetic difference between one of these and a conscious, normal human being might be 99.9% as well. But because engineers would have modified the genetic makeup of the clone to finish with a brain that has a different program, it would behave in a non-human fashion. Would that biological robot, programmed for a specific purpose still be human, or lose a legal case trying to determine if it is still a person? We’ll be tackling with those questions too soon enough.

Engineered biological bodies with limited mental capacity could be useful in the entertainment industries and could have the same rights are modern-day robots with Alexa running their AI interface. It depends on their capabilities and design. Does having an almost fully human DNA give this creature full legal rights under the law?

The meaning of the word “human”

In light of all the different possibilities mentioned in this article, all of which are possible within the 21st century, I wonder about the importance of identifying ourselves as human. We are proud of our human heritage; however, we’ll soon be able to engineer multiple variations of humanity, using biological and mechanical means.

We’ll likely make efforts to categorize these various human-forms and our society will struggle to understand which variation deserves to have human rights. We’ll also struggle with the concept of superhuman, but human enhancement is unavoidable.

I believe we must stop looking at life as an entomologist, categorizing every aspect so we can put each wondrous variation in the correct little box. Perhaps the word “human” should mean “unmodified person” and use a broader term like “being”. We shouldn’t use words that will divide us moving forward.

And who knows, perhaps we’ll meet extraterrestrial beings one day that are more intriguing than anything we’ve ever seen in science fiction movies. I’d hate it if we tried to classify them as superior or inferior to us. I’d hate it even more if they did that to us. Food for thought.

Sylvain Rochon is an international speaker, futurist, author and entrepeneur. His website is sylvainrochon.com. His Twitter feed is @SylvainRochon.

"Engineering Paradise: Are You Ready?" by Sylvain Rochon. https://t.co/QIEhJbaPUa pic.twitter.com/BoP4HLiNH5

The Biggest Roadblock To A Better Future