We have known for decades that secular countries tend to be richer than religious ones. Finding out why involves unpicking a complex knot of cognitive and social factors – an imposing task. So my small research team thought we’d ask a more straightforward question: was it the secular chicken that came first, or the economic egg?

Our recent paper in Scientific Advances shows that, in the 20th century, secularisation occurred before economic development and not the other way around. Although this doesn’t prove secularisation makes a country wealthier, it does rule out the reverse. The arrow of time points in one direction, so economic performance cannot be expected to influence people’s opinions in the past.

Global Gallup surveys give us a clear view of the relationship between secularisation and economic development – that the world’s poorest countries are also its most religious. But before the days of modern surveys, the steam-powered scholars of the early 20th century had already noticed that industrialised societies tended to be less religious than agrarian ones; though they disagreed on the interpretation.

The early 20th century French sociologist Emile Durkheim believed that economic development came first. He saw religion as meeting society’s practical functions, such as education and welfare. But when prosperous societies started to meet these functions all by themselves, religion was pushed to the margins. On the other hand, a few decades later, the German sociologist Max Weber argued that religious change came first. He wrote that the Protestant Reformation unleashed a stampede of productivity and economic improvement because of the “Protestant work ethic”.

Only one of them can be correct. For decades, economists and political scientists, armed with modern computers and advanced statistics, have tried to find out whether it was Durkheim or Weber. Some studies found that secularisation came first, some found that development comes first, and still others found they occur at the same time.

My colleagues and I think one major shortcoming preventing us from getting to a solution has been a lack of historical depth. To measure a complex concept like “secularisation”, comprehensive surveying is required. But this has only been possible in the majority of the world for just a couple of decades, since 1990. However, for the first time, we have found a way to dive deeper and cover the entire 100 years of the 20th century.

This temporal periscope presents itself when we bring together evidence from anthropology, political science and neuroscience: people’s beliefs and opinions form and harden during the first few decades of their lives.

Therefore, despite a lifetime of ups and downs, a person’s religious belief will always reflect their formative years. They unwittingly carry a fossilised version of how secular the society of their childhood was, right into the modern day. So if you want to know how religious the world was in the 1950s, then just see how religious the people are who came of age during the 1950s.

We did this by collating answers from the European Values Survey and the World Values Survey, which have asked people around the world about their religiosity since 1990. By pooling data for people who came of age at different decades of the 20th century, we were able to create a new secularisation time line.

We compared this with 100 years of economic data. The image below shows that, in Great Britain, Nigeria, Chile and Philippines at least, the red secularisation line leads the blue economic development line. And our statistical analysis shows that this is the case in all of the 109 countries we measured. 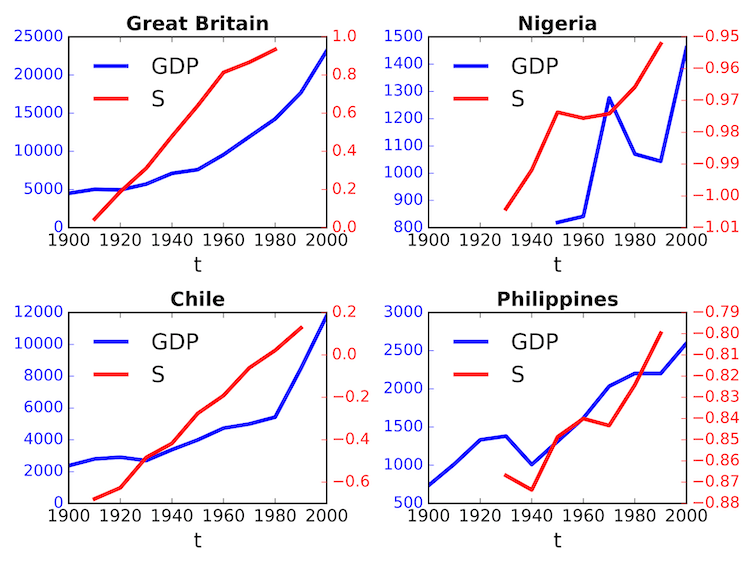 The message is crystal clear: secularisation occurs before economic development and not after it. This means we can rule out Durkheim’s functionalist model, but we cannot declare victory for Weber. Any human society is a cacophony of tangled causes, effects and dynamic emergent phenomena. To seek a single cause for anything in this arena is a mug’s game. So we checked if something else offers a more convincing explanation.

If we zoom in on different regions of the world, we see some rich countries that are religious and some poor ones that are secular. Countries like the US and the Catholic countries of Europe have become economically prosperous, yet religion remains important. Conversely, the former Communist countries of Eastern Europe are some of the most secular on Earth, but have middling economic performance. It turns out that it’s a respect for individual rights that separates the rich from the poor – despite the law sometimes being slow to catch up with people’s opinions in some countries.

Though we shouldn’t ignore the role of religion. It’s easy to see why individual rights flower once religious influence has withered. That said, there’s no reason why individual rights can’t exist in a religious world. If religious institutions can become less of a conservative force and embrace modern cultural values, then they could provide moral guidance for the economically prosperous societies of the future.

What Are The Most Atheist Countries? | NowThis World