Multi-billionaire founder of SpaceX and Tesla Elon Musk said he believes there is a 70% chance of him getting to Mars on one of his spacecraft. The Independent reports:

Tech entrepreneur Elon Musk has claimed there is a 70 per cent likelihood he will make it to Mars on one of his spacecraft – despite there being “a good chance of death”.

The 47-year-old founder of Tesla, who is among several businessmen seeking to find a way to reach the red planet, said while some consider his vision a fantasy, he thinks making the journey could be possible in as little as seven years from now, with the price of a ticket as low as “a couple of hundred thousand dollars”.

“I know exactly what to do,” Mr Musk told Axios on HBO. “I’m talking about moving there.”

Musk said that travelling to Mars would not become an escape option for the super-rich of the Earth. According to the businessman, “the probability of dying on Mars is much higher than Earth”.

“It’s going to be hard. There’s a good chance of death, going in a little through deep space,” he said.

According to his vision, the chosen few who would actually venture to the Red Planet, will have to immediately get busy and work non-stop to build the first-ever Mars base.

“So, you know, not much time for leisure. And even after doing all this, it’s a very harsh environment. So … there’s a good chance you die there,” he said. “We think you can come back but we’re not sure. Now, does that sound like an escape hatch for rich people?”

Elon Musk, age 46, told "Axios on HBO" that he sees a 70% chance that he'll live to ride one of his SpaceX rockets to Mars.

Last month’s NASA and SpaceX successful launch of astronauts from US soil for the first time in almost a decade, has reignited discussion about space travel to Mars and beyond.

In March 2019, the South China Morning reported that British physicist and science populariser Brian Cox finally feels optimistic about the survival of the human race thanks to advances in private space flight.

The lauded British scientist has previously said he was not at a point where he could be assured about mankind’s survival, it being highly dependant on the next one to two decades, but, speaking recently in Hong Kong, he says: “The big change for me has been commercial space flight.”

His new-found optimism comes after Elon Musk’s SpaceX capsule became the first commercial spacecraft to dock with the International Space Station (ISS) and then make a successful return to earth, this month. Musk believes this public-private partnership with Nasa marks the first major step towards becoming a “spacefaring civilisation”.

Brian Cox on why we should head to Mars

Learn How NASA’s Robots, AI & the Singularity Will Save the Future 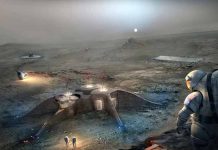 Making the First Martians: Could We Colonize the Red Planet?