In the coming years, NASA’s Project Artemis will send astronauts to the Moon for the first time in fifty years. In the years that follow, NASA and the European Space Agency (ESA) also hope to build a spiritual successor to the ISS – the international lunar village around the Moon’s southern pole.

With multiple space agencies looking to build bases and private aerospace companies like SpaceX and Blue Origin hoping to make lunar tourism a reality, the message is clear: We’re going back to the Moon. And this time, we plan on staying!

But what about the long-term? What about a lunar colony where us regular folk can live, work, and become the first “Selenians” (or “Lunites”, “Lunarians”, “Loonies”, etc.). It’s been explored extensively in science fiction, but how about for real? Could it be done?

Well, sure. Even before space exploration began, actual proposals were being made. But as these all made clear, there are a number of challenges that need to be addressed – not the least of which are environmental in nature. As Robert A. Heinlein famously wrote…

The Moon is a Harsh Mistress

For starters, there’s no atmosphere to speak of on the Moon. Because of this, surface temperatures vary extremely between day and night – from highs of 117 °C (242 °F) to lows of -43 °C (-46 °F). Since there is no atmosphere, and no magnetic field, the surface is also exposed to a lot of radiation.

Most of the surface is also exposed to impacts from meteoroids and micrometeoroids. To top off, lunar gravity is only 16.5% (0.165 g) of what we experience here on Earth. As experiments aboard the ISS have shown, long-term exposure to microgravity has a detrimental effect on the human body.

However, these challenges are also opportunities to get creative. And over the years, the various proposals that have been put forward have been very creative indeed! And with the right technology, the “harsh mistress” could be made livable.

First up, a colony would need to be built somewhere where resources are readily available. Since the Moon is rather far from Earth, the locals would have to harvest resources locally – what is known as In-Situ Resource Utilization (ISRU). The most important of these are air and water.

In the South-Pole Aitken Basin, multiple missions have detected abundant water ice in the permanently-shaded craters there. This ice could be harvested for drinking and irrigation water, and even chemically disassociated to produce oxygen gas and hydrogen gas (the latter of which can be used as fuel).

Lunar regolith (aka. Moondust) can also be used for the sake of creating 3-D printed structures. The regolith can be melted down with microwaves (sintering) and printed out as a molten ceramic or it can be combined with a bonding agent to create “lunarcrete”.

Another option is to build a lunar base within one of the many extinct stable lava tubes that run beneath the surface. These can be found by locating “skylights”, where a section of the surface has collapsed over a lava tube and allow for easy access to the subsurface.

The size of these tubes is large enough to accommodate an entire city, measuring 1 km (0.62 mi) or more in diameter. Not only would these tubes provide natural shielding against the elements and radiation; they could also be sealed off and pressurized to accommodate colonists.

As for the gravity issue? Well, that could be addressed by making sure lunar colonists spend time in an environment that simulates normal gravity (like a rotating torus in orbit). Or, there’s the possibility that medical science will have developed a means to combat the degenerative effects.

All we know for sure is that we are slowly getting closer to it being a genuine possibility. And with everything that’s been planned for the coming years, we might not have to wait much longer! 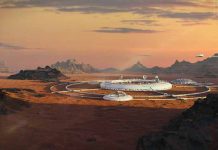