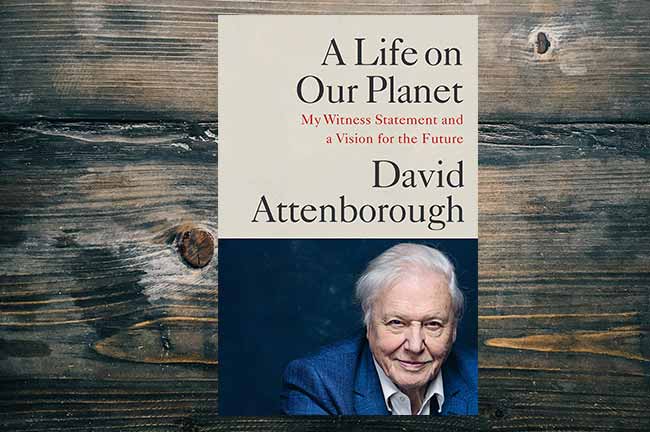 I bought this book this Fall based on my recognition of Sir David’s magnificent lifelong production of nature films. I also was well aware that we shared a view of limitations of planetary resources based on the long prevailing view among my generation about the need for endless growth and limitless ways to exploit the treasures of our planet.

This is not a new message from Sir David, but now just an ever more urgent one.

After being involved professionally since 1965 with various aspects of the issue of women’s reproductive rights but without any academic degree related to that field (e.g. MD or biologist, etc.) I knew from the outset that many of my views on growth limitation and family planning had to come from those who did have such credential.

Fortunately, it has been my privilege to have over these decades the chance to associate with top professional leaders in this field and to draw guidance from their integrity, work and wisdom.

Now, after 4 plus years of disastrous unethical US Presidential leadership and a worldwide pandemic, it is hard to forecast a cheery future for us. Yet stock market pundits still mostly forecast a bullish stock market once the vaccines are widely administered.

I admit I have personally invested most of my own money on that growth assumption. However, I am also keenly aware of what I am about to offer my readers: A critical caveat that has just been presented by Sir David Attenborough in his latest masterpiece, a book, which was preceded by a film, entitled “A Life On Our Planet” which he acknowledged in a prologue on page 232 on July 8, 2020 as the world wide pandemic was already globally rampant.

The film review of the book can be read here.

After a lifetime presenting the natural world, Sir David Attenborough brings enormous authority to his "witness statement" about the dangers of climate change, and prescription for how to address it, in "David Attenborough: A Life on Our Planet" https://t.co/QRAlHcT148

The film’s reviewer, Bryan Lowry of CNN, commented that “Frankly, the production might actually be more compelling if it took a bit more time to celebrate Attenborough’s career, which, he notes, began as the world became smaller thanks to plane travel, and proceeded in a remarkable life that has included visiting parts of the world most people will never see.”

I disagree, finding the stark presentation in the book of the environmental decline in my and Sir David’s lifetimes in relation to the growth of human numbers a much more important argument to make than to reiterate facts so well known about this amazing man’s career.

Perhaps better than any other book I have read Sir David restates the case for human restraint on the Earth’s natural resources—he posits the urgent need for what he calls “rewilding” which you can read in a chapter entitled “Rewilding the Land” starting on page 174.

So what is being done now? Not enough but the pandemic may offer enough powerful leaders the worldwide motivation and recognizance to take collective actions to avert the certain consequences of NOT taking rewilding actions.

Others have and will give you this message but none better than Sir David in this masterpiece.

What I appreciate is how he tells the environmental story by linking facts to the bottom line driver of our planetary overconsumption that is so directly related to the growth of human numbers.

In the books sections, Attenborough lists a series of planetary conditions which occurred in his 94 year life time which so well articulate his points.

In the section entitled “My Witness Section” on page 13 the date 1937 appears below which he writes:

On page 27 the date 1937 appears underneath this information:
World Population: 2.7 billion
Carbon in atmosphere: 310 parts per million
Remaining wilderness: 64 per cent

On page 60 the date 1960 appears underneath this information:
World Population: 3.0 billion
Carbon in atmosphere: 315 parts per million
Remaining wilderness: 62 per cent

On page 39, the date 1968 appears underneath this information
World Population: 3.5 billion
Carbon in atmosphere: 32.3 parts per million
Remaining wilderness: 59 per cent

On page 45, the date 1971 appears underneath this information
World Population: 3.7 billion
Carbon in atmosphere: 32.3 parts per million
Remaining wilderness: 58 per cent

On page 69, the date 1989 appears underneath this information
World Population: 5.1 billion
Carbon in atmosphere: 353 parts per million
Remaining wilderness: 49 per cent

On page 77, the date 1997 appears underneath this information
World Population: 5.9 billion
Carbon in atmosphere: 360 parts per million
Remaining wilderness: 46 per cent

On page 91, the date 2011 appears underneath this information
World Population: 7.0 billion
Carbon in atmosphere: 391 parts per million
Remaining wilderness: 39 per cent

On page 95, the date 2020 appears underneath this information
World Population: 7.8 billion
Carbon in atmosphere: 415 parts per million
Remaining wilderness: 35 per cent

In each of these chapters he cites the decline of major and minor species and vital faunas. While Attenborough’s films are so powerful, just reading the sad progression above should alarm all world leaders into action.

As my readers have often read in my many OP ED pieces which have appeard for years on this impressive web site “Earth had 2 billion humans alive at my birth in 1931. Now we have almost 8 billion and the likely increase to 10 or more billion by 2057. A cataclysm seems likely and you can pick any one of the Four Horsemen of the Apocalypse to reduce our numbers.” This quote from the Introduction to my 2019 OP ED collection.

Much progress in elevating women and minorities to equality have been achieved but time is running out. On December 30th, Argentina legalizes abortion, a major step for women in Latin America.

Argentina Legalizes Abortion, a Milestone in a Conservative Region https://t.co/wGnH2irT1J

Sir David’s book should be read by everyone who cares about our survival.

In the remaining lifetime allotted me, I plan to keep working on the population issue which hopefully will be resurrected to the urgent prominence it deserves by world leaders as a major avenue toward promoting peace, stability and progress. This book makes so clear that bringing human population numbers to sustainable levels must be our number one priority if our planet is to survive in less war, poverty and disruption.

David Attenborough: A Life on Our Planet | Official Trailer | Netflix

Overpopulation & Climate Change: A Seat at the Table