Rampant corruption and greed in the medieval Catholic Church triggered the Reformation, which spawned a never-ending bloodbath of Catholic-Protestant wars in Europe.

A preliminary rebellion erupted in the 1400s when Czech priest John Hus protested the sale of indulgences (paid forgiveness for sins) and denounced Vatican immorality. He drew followers, some of whom were executed. Hus was excommunicated and exiled, but he persisted. An emperor gave him safe passage to present his grievances at the 1415 Council of Constance — where he was seized and executed. This caused the Hussite Wars, with papal armies repeatedly engaging Hus followers until they were crushed.

Martin Luther’s historic revolt began in 1517 when he nailed his 95 protests to a church door — unleashing a century of holy slaughter. The first outbreak was the Peasants’ War in which hymn-singing amateur soldiers were decimated by trained legions.

In Switzerland, Protestant Ulrich Zwingli led a revolt against Catholic cantons. Zwingli was killed, but his side triumphed in the end, since Switzerland turned Protestant.

In Germany, Lutheran princes formed an alliance, and Holy Roman Emperor Charles V sent Catholic armies to annihilate the Protestants. He lost, and was forced to accept the 1555 Peace of Augsburg, which allowed 300 local rulers to choose whether their districts would be Catholic or Protestant.

In Spain and Italy, the Holy Inquisition ferreted out secret Protestants and burned them.

In France, Catholic King Henry II created a heresy court to find and burn Protestant Huguenots. Religious warfare erupted, then subsided, then erupted again — eight separate times. After the third war, ruler Catherine de Medici sought to end the horror by marrying her Catholic daughter to a young Huguenot prince. But when Huguenots came to Paris for the wedding, they were massacred at night on Aug. 24, 1572 — St. Bartholomew’s Day — in a surprise attack. The Huguenot leader’s head was sent to Rome. The pope, Gregory XIII, struck a medal celebrating the Catholic victory.

Thousands of Huguenots fled France. One group settled at what is now St. Augustine, Fla. A Spanish fleet found them in 1565 and killed nearly all, posting a sign saying the settlers were executed “not as Frenchmen but as Lutherans.”

In the Low Countries, Protestantism grew, but Catholic ruler Philip II of Spain sent armies to exterminate it. Protestants rebelled and burned 400 Catholic churches. After a decade of killing, they finally won independence in northern provinces.

England’s Protestantism was different because Henry VIII broke with Rome to gain a right to divorce. His Anglican Church ruled — until his daughter, “Bloody Mary,” gained the throne and unleashed a wave of executions to force England back to Catholicism. Her burnings of Protestants sickened most English, turning them bitterly against Rome.

The last great spasm of the Reformation was the Thirty Years’ War, from 1618 to 1648. It started because Protestant nobles entered a Prague palace and threw two Catholic ministers out a window onto a dungheap. The resulting Catholic-Protestant slaughter seemed unstoppable and killed millions in Germany, leaving starvation and poverty behind.

Violence between Catholics and Protestants convulsed the continent of Europe for a long time.

Top 17 Popes Who Didn’t Practice What They Preached

Martin Luther, the Reformation and the nation | DW Documentary 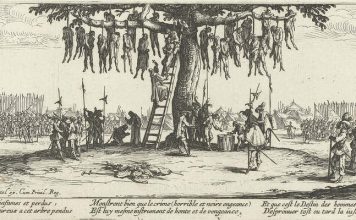