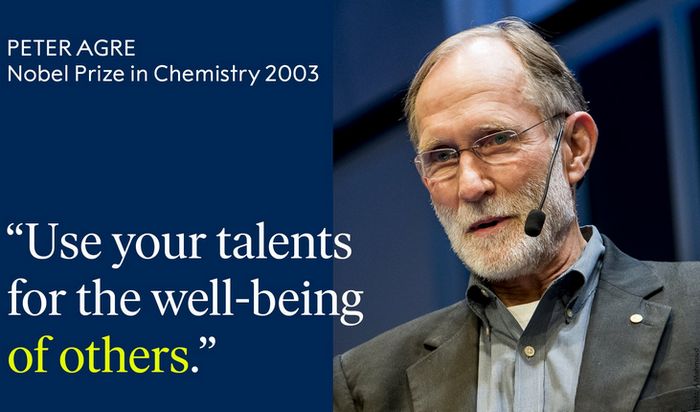 You probably don’t know who I am. And really, there’s little reason you should, despite the pin on my lapel that indicates I’ve received a Nobel Prize.

Perhaps the last Scientist Everyone Knew was Jonas Salk in the 1950s, when dinnertime discussions centered on the polio vaccine. A few years later, the name Sabin was a household word, and people debated the relative value of Salk’s injected vaccine and Sabin’s oral vaccine.

Or maybe the last Scientists Everyone Knew were astronauts Neil Armstrong and Buzz Aldrin, made famous by the space race of the 1960s and early 1970s. Our very visible competition with the Soviet Union inspired many kids to study science.

But times have changed. Today’s diseases seem subtle by comparison, and our scientific achievements are less photogenic than a boot print on the moon.

Heart disease, diabetes, and cancers affect many more people in the United States than polio did in the 1930s, ’40s, and ’50s, but there are few comparable images to the heart-wrenching photographs of once-healthy children paralyzed by a viral infection—documentation of the ravages of infectious disease in the developing world notwithstanding.

At the same time, today’s scientific success stories, such as our understanding of risk factors for heart disease and diabetes or our new treatments for cancers or for HIV infection, stem not from a single individual’s achievement, but from the cumulative advances of many. Who would—or could—carry the mantle for such work? Even our space program no longer lends itself to broad recognition of a single astronaut—barring scandal suitable for the evening news.

But one thing hasn’t changed. Science still can find cures for incurable diseases, awe us by revealing nearby planets and distant galaxies, and trigger gee-whiz moments by calculating the “color” of the universe or uncovering a gene that might have caused Alfalfa’s stubborn cowlick. In fact, science today might be more broadly important than ever before. Many public-policy issues of greatest concern to Americans are related to science—think global warming, stem-cell research, alternative energy, and coastal development.

#NobelLaureate Peter Agre on the possibilities of science diplomacy:
'Scientists in all these different countries share the notion that science is something that can make the world a better place for our children and our grandchildren.' #LINO18 @sciencecomedian @JohnsHopkinsSPH pic.twitter.com/1pcUEDPOBg

It is our responsibility as scientists and researchers to inform these debates, not just by publishing our results in professional journals, but by making the information accessible, and ourselves available, to the public.

Take, for example, America’s stem-cell debate. At one extreme are people who believe frozen human embryos are human life and, thus, research stemming from their destruction shouldn’t be allowed. At the other extreme are those who believe that with ample funding, cures would be imminent. How did we get here?

The designation of human “life” in this debate is largely a religious issue, and therefore a scientific consensus about what constitutes “life” is not really germane. At all other points on the spectrum between the debate’s two extremes, however, science is applicable. Much of what scientists want to learn by studying stem cells is very basic: How do these cells do what they do? What signals control them?

But scientists and others are also keenly aware of the potential of stem-cell research to influence conditions such as Parkinson’s disease or spinal-cord injury, either by developing “replacements” for damaged cells or by harnessing the body’s own regenerative abilities. Scientists active in the stem-cell debate have not claimed that such therapeutic applications are imminent, and yet many people expect quick results.

I suggest that the dichotomy reflects a lack of understanding of how science is done—and how fast research can progress to the clinic—on the part of the public, the government, and the media. And so it is the duty of all scientists to engage the public, to explain their work and how they do their work. Getting science before the public, whatever the topic, should make for a more well-informed population whose expectations are more consistent with what scientists can deliver.

As federally funded researchers, we have a responsibility to communicate our work’s relevance. Given the politicization of science in recent years (notably in such areas as global climate change), we must be willing to go a step further when needed, to get out of our laboratories and speak responsibly about what is good science and what is not good science. Most opportunities will be local: volunteering at schools, speaking to community groups.

I have spoken to many people in many countries about science and about my science over the last few years. I have encouraged young researchers to be curious. With the group Scientists and Engineers for America, I have advocated for a more scientifically informed government. I have testified before various Congressional panels to inform that government. I have even subjected myself to the mock-interview routine of Comedy Central’s Stephen Colbert.

Scientists and physicians must be engaged with the community. I’m not sure there will ever be another Scientist Everyone Knows, but it is in our best interest to ensure that everyone knows about science.

Peter Agre is a physician and molecular biologist. He was co-recipient of the 2003 Nobel chemistry prize for elucidating how water is transported into and out of the cells of the body. In February 2014, he was named a Bloomberg Distinguished Professor at Johns Hopkins University for his accomplishments as an interdisciplinary researcher and excellence in teaching the next generation of scholars. He has received 19 honorary doctorates from universities around the world, including Japan, Norway, Greece, Mexico, Hungary, and the United States.

The human side of a life in science | Peter Agre | TEDxMidAtlantic